No one even mentioned the new Raspberry Pi Pico?

At the Duluth Georgia Microcenter Store: 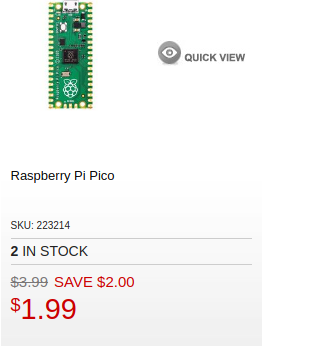 For those interested in C programming examples, here they are:
https://github.com/raspberrypi/pico-examples

Here is a listing of the hardware API library:
https://raspberrypi.github.io/pico-sdk- ... dules.html

To me, The Raspberry team seems to be content to let Arduino handle the porting to that framework:
https://blog.arduino.cc/2021/01/20/welc ... ntrollers/

Ok, some vendors have made similar things, some even with far better capabilities. Yet nobody in our community seems to be using them. This seems to be a very focused version that tries to solve just what the maker community would need, nothing more, and with proper backing so it will be used.

Looks like a great addition to me imo. But maybe I'm missing something?

IMO:
In theory, it is a fantastic capability; morph some flexible logic into a serial "device" for extra capabilities: serial, SPI, etc. In Cypress PSoC land, this can be done with Verilog or with drag-n-drop editor: in the GUI, there are numerous property sheets that must be configured before the configurable logic becomes useful. Debugging is a P.I.T.A.

Now consider the trouble our forum members have with I2C and SPI "hard" silicon! Just configuring the standard parameters is problematic. STMFxxx silicon has a limited amount of configurable internal networking fabric to route physical pins to internal on-silicon components. Configurable logic requires more understanding of standards and timing; therefore, while not hard to grasp, it is complex for people who traditionally refuse to consult technical documentation; that is, a goodly number of users will find their talents strained.

I am a huge fan of Cypress and the PSoC line, but it was initially frustrating. HDL folks will relate.

I do not wish to sound negative on the Pico, but most users will need to put out far more effort to use it than they put out in this STM32duino forum. It will take a while to mature an Arduino core and likely longer to develop "canned" device configuration libs. Maybe at the point where the PIOs are libraries the device will be usable to average coders; until then it is a device before the needed software tools.

I don't see why using the PIO should be any harder than using I2C on an stm32. Yeah, for the guy making the library, they have to work a bit harder & know more. But in the end it seems to me to be a board that's reasonably small, with very flexible options regarding IO. Need some more uarts? no problem. don't need more uarts, but 2 more hardware SPI's? no problem. want some hardware neopixel support? no problem. And programming these things is indeed again an order of magnitude harder than for fixed IO's, but if it's properly wrapped into a library, it just makes this little board a lot more flexible in what you use it for.

Maybe i'm a bit too optimistic about this, we'll see. But i'm intrigued. They indeed did not invent sliced bread, but seem to have added a potentially very useful feature to this microcontroller, and if made properly available, it should be as easy to use as any other peripheral.
Top

racemaniac wrote: ↑
Wed Jan 27, 2021 7:36 am
...Maybe i'm a bit too optimistic about this, we'll see. But i'm intrigued. They indeed did not invent sliced bread, but seem to have added a potentially very useful feature to this microcontroller, and if made properly available, it should be as easy to use as any other peripheral.

In those terms, 'someone else writes a C++ library', then I agree. Then, we have a PSoC clone in Arduino Land but with a fat SRAM and higher system clock... stuff that one expects from Moore's Law. Unfortunately, the PICO does not integrate an analog block ... not every project is "just digital."


PSoC® 4 is a scalable and reconfigurable platform architecture for a family of mixed-signal programmable embedded system
controllers with an Arm® Cortex™-M0 CPU. It combines programmable and reconfigurable analog and digital blocks with flexible
automatic routing. The PSoC 4200 product family, based on this platform, is a combination of a microcontroller with digital programmable logic, high-performance analog-to-digital conversion, opamps with Comparator mode, and standard communication and timing
peripherals. The PSoC 4200 products will be fully upward compatible with members of the PSoC 4 platform for new applications and
design needs. The programmable analog and digital sub-systems allow flexibility and in-field tuning of the design.

I look forward to seeing the performance comparison between the Pico, Uno/Nano, STM32F1, STM32F4, ESP 8266 and the ESP32.
Top

With ARM M0+ the performance will primarily be directly proportional to the main clock. Therefore, the PSoC units were clocked at 48MHz, the STM32F1 units are typically 72 MHz, the Espressif SOC 80 MHz, and so on. Of course, those familiar with the units know that the Arduino IDE will allow the BluePill to be clocked to 128 MHz but you lose USB.

As you go from M0 up the ARM line of CPUs, you do get some more efficiencies for specific workloads: 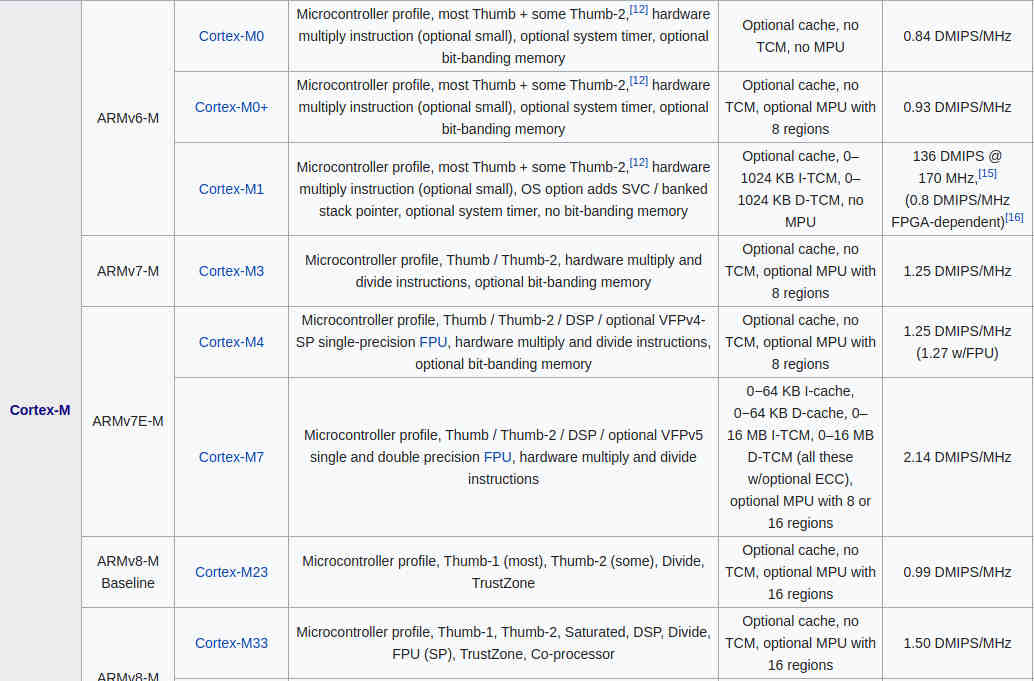 ^^ Interesting... Thanks for taking the time to put this together.
Top

I have received my Pico today, and it blinks so nice

The only annoying thing is that I have to remove the USB cable and plug it again while keeping reset button pressed to get into upload mode.
It really needs a bootloader, HID or CDC

same gcc as the current one used for stm cores?

From the Getting Started PDF: https://datasheets.raspberrypi.org/pico ... h-pico.pdf
(Seems the "PC" of choice here is a rPi 4)

To build the applications in pico-examples, you’ll need to install some extra tools. To build projects you’ll need CMake, a
cross-platform tool used to build the software, and the GNU Embedded Toolchain for Arm. You can install both these via
apt from the command line. Anything you already have installed will be ignored by apt.

1. Native gcc and g++ are needed to compile pioasm, elf2uf2


Section 6 of the manual discusses the GUI development overlay:

to install.
Once the install has completed, install the extensions needed to debug a Raspberry Pi Pico:

Return to “Off topic”