i tried VSCode with Arduino extension in Linux 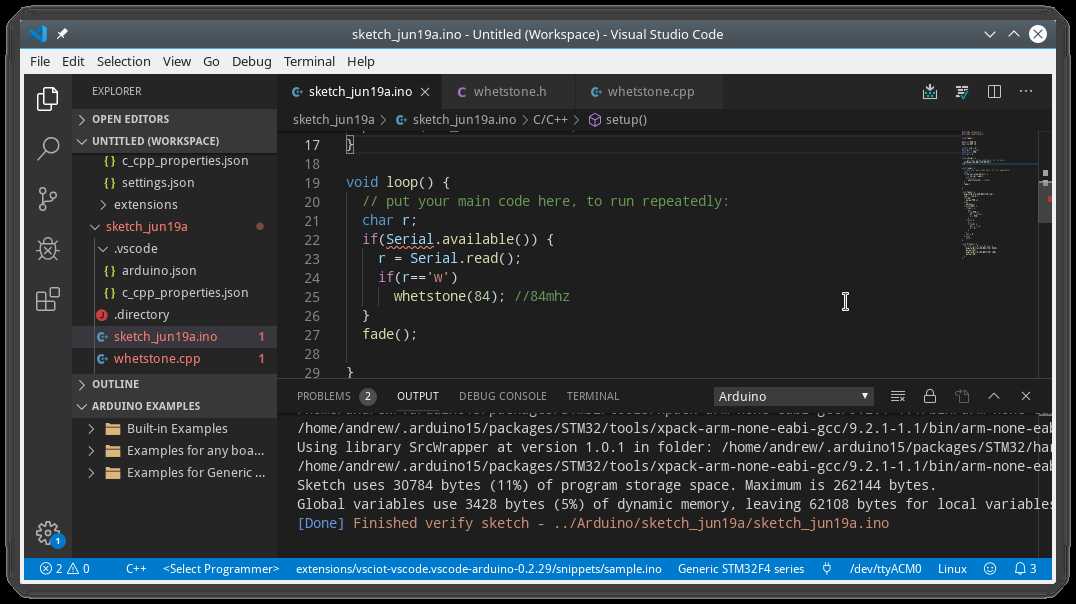 the value add in VScode as like Eclipse, is that symbol reference and jumps is easy, so drill down / reference jump into function codes or struct definitions is much easier with the IDE. i think it is possible to debug, but i've not explored that
Last edited by ag123 on Thu Jan 02, 2020 6:34 pm, edited 2 times in total.
Top

fpiSTM did a good job with it. though i hit some java issues and i actually installed the stm32duino official core
using the Arduino IDE
https://github.com/stm32duino/wiki/wiki/Getting-Started
did some tests, and then try to do get the blinky with whetstone benchmark to build and run in VSCode
the usage is less than straightforward in linux
one of those things is that unlike the arduino IDE, it deletes the temporary build folder so the built binary is inaccessible using 'verify'

it turns out there is an 'undocumented' work around
https://github.com/microsoft/vscode-arduino/issues/477
it turns out add the 'output' attribute in the hidden file
.vscode/.vscode/arduino.json

initially i hit another issue that it keep running the samples. it turns out i need to 'add folder into workspace' for the sketch folder in VSCode.
then it seem i'd be able to select the appropriate sketch to build
Top

That's sound strange that you need to define the output, maybe related how you create your example.
If you used the Arduino example menu then it create properly the workspace and you don't need to specify output.
I specify the output when I use the Cortex Debug extension to get access to cortex and peripherals registers.
Top

defining the output is not really needed, in the default configuration, it writes to a temporary folder
but the temporary folder is deleted once verify is done, so i'm unable to access the binary that is built

setting the output here is so that the compiled objects and binaries are saved in my selected output folder
and i tend to install the binary separately myself
i keep binaries for the reason that i reuse my boards, it is a hassle to have to rebuild when i need the binary
Top

Hi age123,
Have you tried to "install" Roger core under Vscode +Arduino plugin? Is there a guide how can I install It?