Thanks fpiSTM, but I have no idea what you mean.

How would HAL, LL or CMSIS look if I used them in the Arduino IDE? Or would they only work in the STMCubeProgrammer?

Is this what you would expect? Am I doing something fundamentally flawed?


Have you set optimization to "fastest -O3" in Arduino IDE (menu Tools -> optimize) ?? Because this ~1.5x difference I get with standard (-Os) optimization (smallest).

I jusrt re-tried the digitalWrite version of the same sketch and got pulses of about 60nS, with no difference between optimization settings.

Thanks again fpiSTM. That is a really clear and useful link. As far as I can tell the code given is understood by STM32CubeMX and not by Arduino IDE, is that right?

I have tried some of the code snippets given but they just get rejected by the IDE with error messages.

I am comfortable with register level programming but don't particularly want to move back and forth between programming environments.

I wrote simple program for testing digital IO speed.
For read tests it's using 2 different pins (PA1 and PB1).
This it what I get (-O3 fastest optimization):

That is fantastic GonzoG. It works and I agree with your timings (approximately).

Now I need to do some serious studying to see what is different between yours and mine.

Very despondent. I studied GonzoG's code until I understood what was going on, then, using his/her sketch and all the #defines etc I inserted my own code and watched it on a 'scope.

Same problem. digitalWriteFast works a dream producing a pulse train of about 18 pulses in a microsecond, suggesting a clock frequency of 72MHz before loop() and other overheads. Spot on.

digitalReadFast is another issue. Using this code within GonzoG's sketch:

The red trace is the trigger pulse, the blue one is the Pill's response. The fastest is about 50uS, the slowest is about 550uS - half a millisecond!

Since the IO is working, what else can be going wrong?

ps. IanNoob, to add images from hdd, you need to add them as attachments.
Top

Well, I cracked it – sort of.
I spent the last week dissecting GonzoG’s code and watching it on the ‘scope. The two fast Read commands show the same waveform and time – about 55nS.
I also worked out how to do this in assembler – and got the same timings and waveform as GonzoG did with C!

I then worked out how to combine Read and Write which is what I wanted, the first stage in a fast ‘stopwatch’.

So here is one montage of two traces recorded in ‘persistence’ mode – where successive traces are overlaid on each other.

Both show asm pulses from a 5V 16MHz Nano taking 2 clock cycles (125nS) in red.
The blue trace shows the response from a Blue Pill running at default speed (72MHz) which is reading the input from the Nano and responding with a minimal 2 command pulse.
The scatter of the responses is due to the fact that the Pill is getting an input at random timing and is responding according to the ‘railway journey conundrum’.

The top trace is using a stripped down version of GonzoG’s software, the second trace is my first asm. Third is neater trace but with 2 branches in he asm..

What puzzles me is that some of the responses in the top trace are faster while others are significantly slower than those in the lower trace. 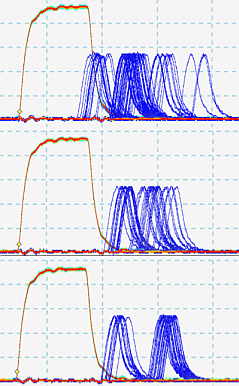